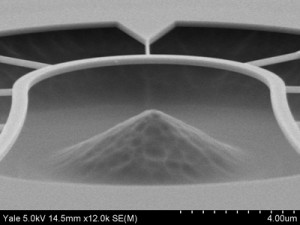 BUFFER HF IMPROVED is an idealized buffer preparation characterized by a high buffer index and an optimized, uniform oxide-etch rate. The composition of BUFFER HF IMPROVED is precisely controlled by HF activity measurements and electrometric pH. The mass balance corresponds essentially to HF + F + 2(HF2) for a two-ligand mononuclear complex and the charge balance is (H+) – (F) + (HF2– ). The HF activity is maintained constant through the specific equilibrium constant, which regulates the equilibrium reaction between fluoride, bifluoride, and HF buffer components. A second equilibrium constant participates in the regulation of the hydronium ion concentration.

BUFFER HF IMPROVED is produced and analyzed to be essentially free of impurities. Nitrate ions, a common impurity causing stains on diffused silicon surfaces, are specifically removed. Heavy metal impurities, which can lead to degradation of device characteristics, are rigidly controlled under manufacturing process specifications.

* Etch rate may vary depending upon Silica film structure

USE OF BUFFER HF IMPROVED
BUFFER HF IMPROVED dissolves silica films (both thermally grown and silane SiO2) produced on the surfaces of silicon and exposed by photolithography. It also is capable of dissolving doped silica films such as phosphosilica and borosilica glasses as formed in semiconductor processing. The overall chemical reaction is: 4HF + SiO2 -> SiF4 + 2H2O

For trouble-free operation BUFFER HF IMPROVED is recommended in the new technologies for manufacture of semiconductor planar and mesa devices. it is compatible with both negative and positive photoresists. Excellent results with good reproducibility are simple to achieve without undercutting marked oxides, surface staining or device degradation by metallic impurities.

Note: etch rate is dependent upon composition of PSG and BSG.

Employed as a dip etch to remove SiO2 films from contacts without the disturbance of the PSG film. BD Etchant is used prior to metallization of the contact holes of the silicon transistor wafers followed by water and alcohol rinses.

TIMETCH is a specially prepared etchant solution offering excellent control in the etching process of silicon dioxide, without undercutting. TIMETCH is compatible with negative and positive photoresists.

Rate of oxide removal is 1.5 Å/second at room temperature for deposited oxides. The rate is somewhat slower for thermal oxide. The etch process is followed by rinsing with distilled deionized water. Timetch is compatible with copper.

I. AlPAD Etch 639 is an oxide etchant designed to minimize attack on aluminum pads or other aluminum structures and on silicon surfaces. These oxides are commonly grown in vapox silox or other LPCVD devices. The deposited oxide is often used as a passivation layer over a metallized silicon substrate. The formulation of AlPAD Etch 639 includes a surfactant to ensure wetout over high surface energy substrates.

Transene Company’s quality system is ISO 9001:2015 certified. A copy of our quality policy is available upon request.
Click here for a copy of our ISO certificate